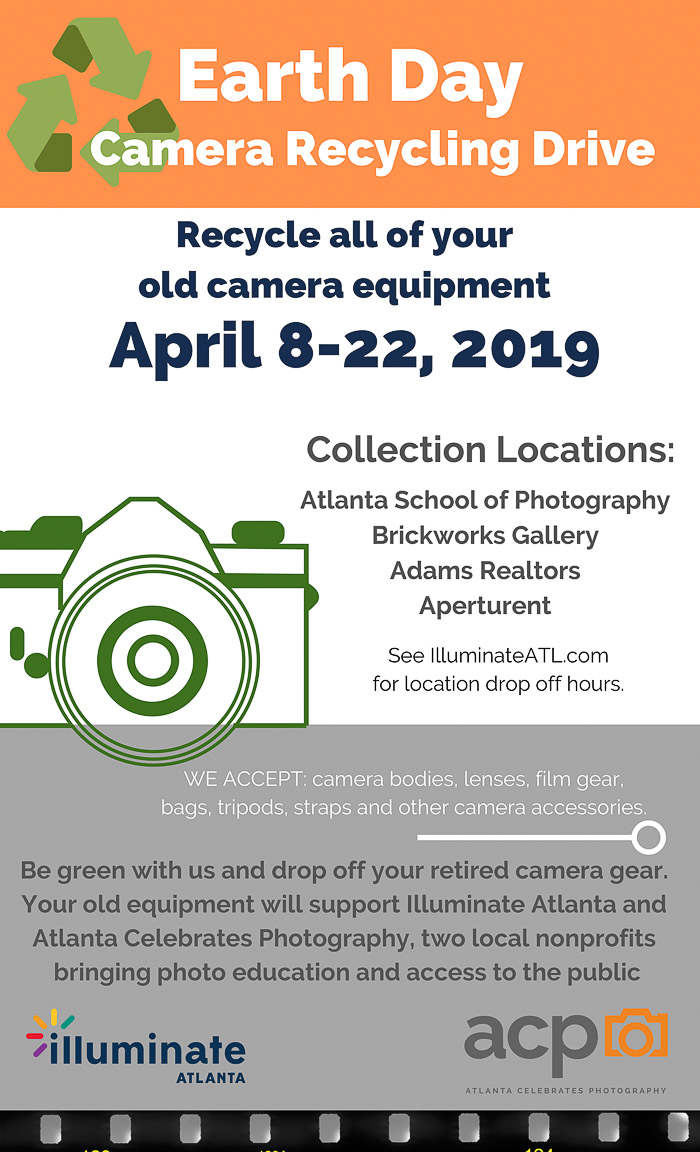 Posted April 8th, 2019 by ACP in Donate to ACP, Friends and Neighbors

For her first solo exhibition at Poem 88, Lisa Tuttle presents a series of images that correct Confederate monuments toward an historical accuracy.

Tuttle says about the work:
"It really began as a hypothetical proposal but the more I work on it, the more I think that it is completely feasible. “Mock” can also imply ridicule, and that is not my intention. A bit tongue-in-cheeky perhaps but increasingly a serious, alternative albeit subversive proposal. Historical observance of the defeat and surrender of the CSA (April 9, 1865 at Appomattox Courthouse and the dissolution of the CSA government on May 4, 1865 in Washington, Ga./Wilkes County.) If “historical” significance prevents their removal, then perhaps we might observe a different, but accurate, historical significance!"

Posted February 20th, 2019 by ACP in Friends and Neighbors

So fantastic to see this mural through the rain this morning, on the Fulton County Daily Report building at Pryor & Trinity. The piece is part of Off the Wall ATL, an incredible effort from local arts non-profit Wonderroot.

"Sheila Pree Bright re-created the Richard Avedon image with mothers of unarmed victims of police brutality from across the nation. These mothers have become leaders and activists fighting for social justice to bring about accountability and policy reform that speaks to racial injustices in the 21st century."

The New York Times covered the mural with this piece from Fayemi Shakur: "From the Civil Rights Movement to Black Lives Matter: Honoring Black Mothers Who Lost Their Sons." And the Off the Wall project was on CBS This Morning last week, including an interview with Wonderroot executive director (and former ACP board member) Chris Appleton.


It's also fascinating to see how the Avedon photograph is one of at least three frames from this particular shoot. An alternate shot, below, appeared in his book "Nothing Personal".

This version above is a slight crop of the original frame, and here's a 2nd version of the mural photograph, but this time without Julian Bond's daughter, Phyllis.

Posted February 6th, 2019 by ACP in Friends and Neighbors

"Please join us at the official closing party of Fulton County Arts and Culture's Fine Art Acquisition Program Exhibition. The exhibition features 114 pieces of art recently purchased by the County, our largest acquisition to date.

New to ACP? Sign-up for our email list for chance for free tickets to “Home for the Holidays”

Are you new to ACP? If you love beautiful things and want two free tickets to attend the show home from Atlanta Homes & Lifestyles, be the third new person to sign-up for our email list today, and we'll be in touch with your pair of tickets!

For the rest of you, the show home is open through December 9th!
Posted November 15th, 2018 by ACP in Friends and Neighbors

Gwinnett Tech students have created a petition in support of the photography program at their school, which has been terminated. We urge you to take a look at the comments of students (and former graduates) on the page, and do whatever you can to support Gwinnett Tech photography students and faculty.

ACP has both roots and current ties to students and teachers at Gwinnett Tech, and values the quality & specificity of what the program offers. Oversight of Gwinnett Tech is through the Technical College System of Georgia.

"Recently the President of Gwinnett Technical College, Dr. Glen Cannon, announced the termination of the Photography program. There was no indication it was coming, nor why it happened. It is our hope that with enough signatures the school board will reconsider the decision. This program is a wonderful program that has produced 100's of talented artist, many of whom are well known in the their field. Please sign this petition to stand with us and save not only the Photography Program at Gwinnett Tech, but to help remind people how important the arts and creativity are to the world."

"Photography has never been more accessible than it is now given the proliferation of cell phones. But camera in hand does not a skilled photographer make. The technical skill and knowledge required to master photography make a program like this critical. Please, GTC, reconsider this devastating and shameful decision. - Debbie S."

"This is a solid program with a great track record and legacy. Supporting the arts takes courage in today's academic and budgetary environment. Stay strong, GTC! - Bill M."

Posted May 10th, 2018 by ACP in Art Events, Friends and Neighbors

Bodies! Lenses! Bags! Tripods! It's a great time to refresh and clean your closets of cameras and equipment, plus, your gear can help support ACP.

A very special thank you to Brickworks Gallery, Fulton County Arts and Culture, and KEH for making this happen!

Posted April 19th, 2018 by ACP in Friends and Neighbors

Great to see the turnout at Pace Academy on Sunday for the Georgia Photography Awards and Exhibition, now in it's 27th year. (!)

ACP Board President Barbara Griffin was the juror this year, and big thanks to France Dorman for pulling together the show. Fantastic!

Explore the best source for all things photographic in Atlanta (and beyond) and receive ACP Blog updates by email.